My own interpretation of 'FLOWERS'...?
A featured portrait in tribute to everyone's favorite literary poor-little-rich-girl, the fictional (and famously high-maintenance) 'DAISY Buchanan, of "Great Gatsby" fame.


I adore flowers.  I really do.  Especially right now, knowing that Spring is just about to be sprung.  Those early daffodils and tulips, when they finally do sprout, will be such a sight for sore eyes...!  And yet as much as I love 'em, I just wasn't interested in painting actual blossoms for this month's theme.  I know perfectly well how little else bores me faster than a very literal approach such as that....


Instead, I put my thinking energy into famous, flower-named protagonists of popular literary history..., and then this is what sprang into mind.

Once I had my concept, I figured it would be a fairly straight-forward project.  I mean please, we're taking a Portrait here -- isn't that, you know, kind of like my thing...?  But no indeed.  True to her flighty, temperamental self, Miss Daisy at first didn't want to play ball.   I had to gesso her over completely TWICE before I felt I was heading in the right direction.  Talk about fickle -- two, precious time wasting false starts later (thanks for that!), it finally felt as though she was going to stick around to stay.  After the 2nd false start, I admit I came dangerously close to just blowing the whole thing off -- too frustrating!  Just chalk it up to 'practice' and sit this one out.  And yet I know the hard way that that's a slippery slope best for me to avoid (one month, turning into two, turning into three, and right on down the slide).  Rather, I gave it my best Hail Mary shot, despite the fact it meant missing the official beginning of the contest, on the 20th, and going for a 5-Day auction instead.  Oh well!  Not the end of the world, and better late than never, right...?   Besides I'm actually rather pleased with the way she turned out, so it's all good.


The following is my auction description:

~"Daisy Buchanan"~
My entry for this month's Nibblefest Art Contest (NFAC),  the theme for March being 'Flowers', features a portrait painted in tribute to a protagonist of the 1925 vintage classic, "The Great Gatsby", by American novelist F. S. Fitzgerald.  Painted on all sides in acrylics upon a 7" wooden oval plaque, this original, entitled "Daisy Buchanan", is signed and ready to hang.

As usual for Nibblefest, I thought long and hard about this month's 'Flowers' theme.  I knew painting actual blooms probably wasn't going to keep my interest for very long (too straightforward).  Instead, a women's name came into mind: "Daisy"..., as in Daisy Buchanan, everyone's favorite literary poor little rich girl.  Daisy was beautiful, charming and wealthy, so much so that when a destitute young officer from humble beginnings named Jay Gatsby happened to cross her path, he just couldn't get her off his mind (for like, years).  In fact, he went on to create a whole new identity, fortune and persona for himself, all with the soul intention of luring her high-maintenance self back.  The fact that she had impatiently gotten hitched to a powerful man within her own social circle, presented but small obstacle in his mind.  The jilted Gatsby went on to make his own way in life (never mind the legalities), and years later was able to purchase a ginormous mansion smack dab across the bay from his beloved Daisy's house (hmmm, stalker much???)  Every night he focuses upon a glowing green light that shines across the water -- it's the blinking bulb at the end of Daisy Buchanan's dock.  As it says in the book,"Gatsby believed in the Green Light....".

(Included in my portrait is Daisy's green light, which features prominently in the story (plus for anyone thinking my interpretation may be too much of a stretch for 'Flowers', notice the wee roses I included in the lace overlay of her gown)...).


*To see all the fabulous 'FLOWER'-themed Nibblefest entries, click here....*

Posted by Patience at 8:38 PM No comments:

Labels: inspired by literature, recycling/repurposing/upcycling, Something From Nothing

My Entry for EBSQ's February 'What a Doll' Show: 'Beryl Moon'

Last month, EBSQ, the online art community I've long been a member of, hosted their monthly art exhibit, with the theme for February being, "What a Doll".  This was my entry: "Beryl Moon", an Art Doll sculpted using paper mache plus a whole host of all-recycled materials
(click here to see my entry in the exhibit).....


I painted and finished her as inspired by the following poem, by Emily Dickinson:


She was actually a long time coming, my "Beryl Moon", because I initially began her many moons (ha-ha) ago, only to set her aside for some reason (ADHD mostly, I suppose), abandoned and unfinished.   Started as part of a project to rescue the dead, mangled barbies left behind after my daughter's childhood, it was my intention to breath new life into these hopelessly broken objects so as to keep them out of the waste stream, where they were surely destined.  And I did get a reasonably good and interesting start on a few of them, before I became distracted by something else and rudely shoved them all onto the back-burner (story of my life?)....


However, this one in particular was the furthest along....: 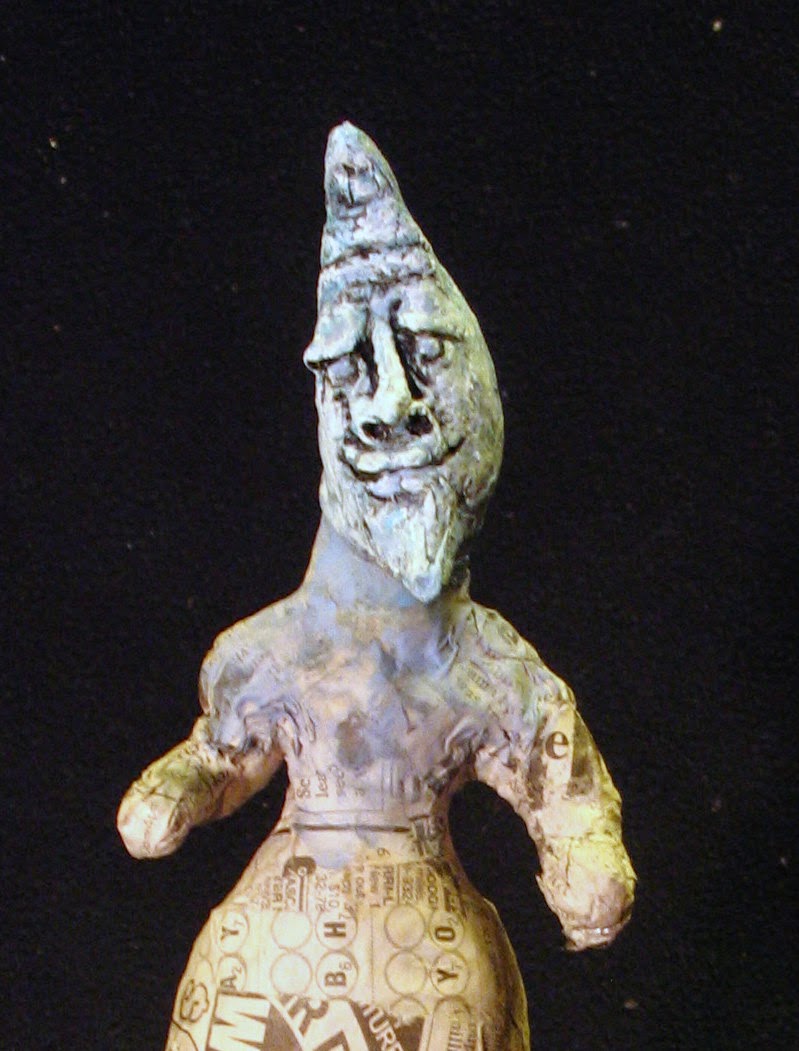 ....thus she was the one I grabbed when I decided I needed something to enter into the EBSQ "Doll" show last month...: 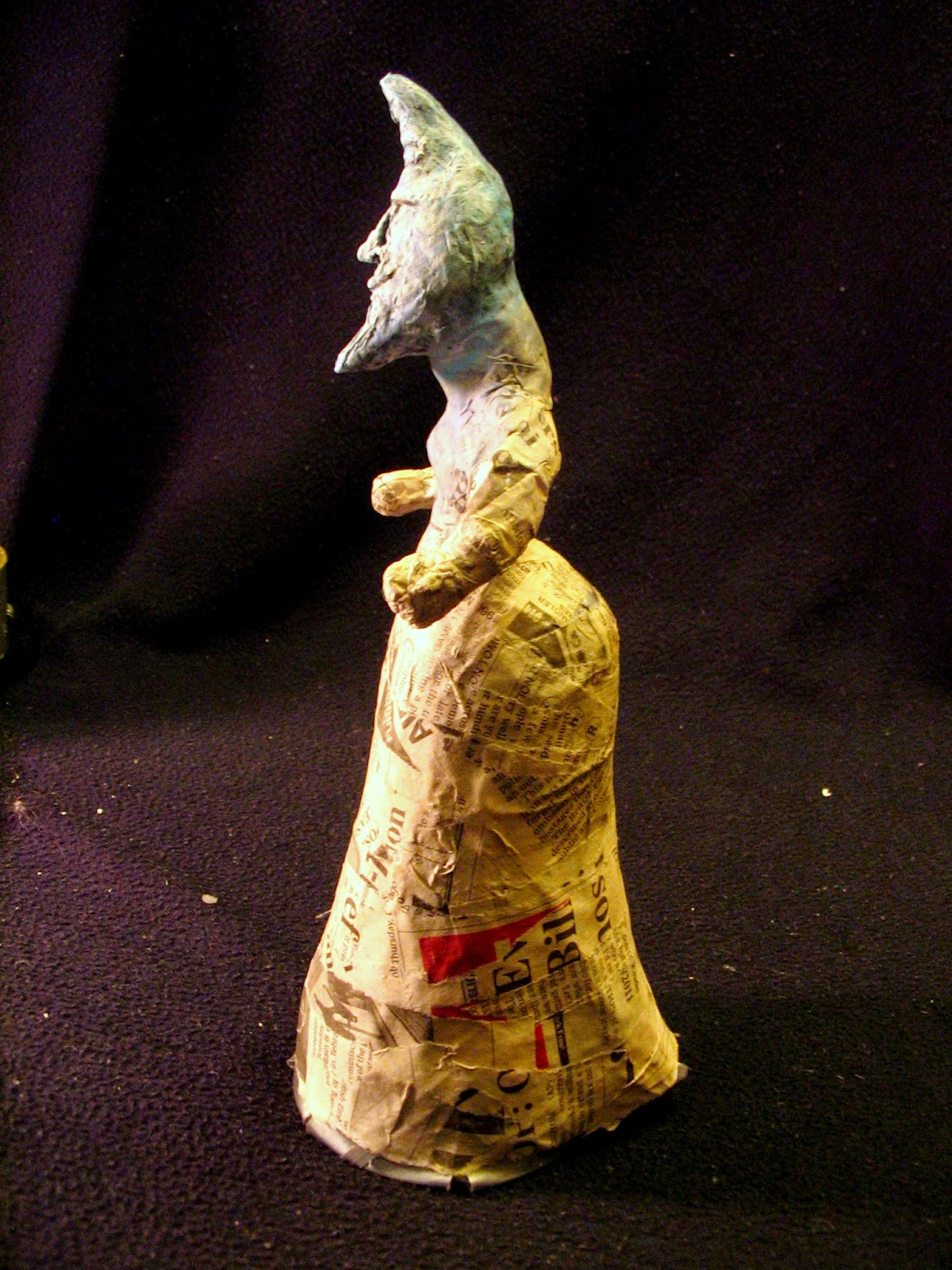 And so I got her finished, finally....!
The following is cut and pasted from my artist/entry statement (because I'm lazy like that):

Buried deep inside 'Beryl Moon', under Celluclay (a commercial paper clay product) and layers of paper mache, is a wee 'injured' action figure, but a few inches tall, and missing an arm. Spared from a landfill life, he now provides some inner armature for this Art Doll, though little of him is actually recognizable anymore, given that an entirely new being was sculpted over and around his original form, using re-purposed items (including but not limited to: a plastic cup, multiple plastic cup lids, and newspaper), for a complete and thorough transformation. A whole new, crescent-moon shaped head was sculpted from Celluclay and attached (the head of the original figure/doll ends somewhere deep within in the present neck/chest area), along with a newly sculpted arm, and new hands. In addition to gaining inches in height (now standing about a foot tall), "he' also became a 'she', complete with a newly sculpted bosom, as well as a big, bustled and flowing skirt of Stars -- using as my inspiration the poem, "The Moon Was But a Chin of Gold", by the wonderful and talented poet, Emily Dickinson....:

Posted by Patience at 6:18 PM No comments: