Oh, Nibblefest Art Contest.  That lovely-and-lively, fun-and-friendly art competition which rolls around ever so faithfully each and every single month.  Did you think I'd forgotten about you...?

No indeed.  Happy to report I'm back in the Nibblefest saddle again this month after a wee hiatus while I was off and busy doing other things.  And now here we are in March.

Having sat out several contests in a row, I unfortunately missed out on some really neat themes I would have otherwise been quite inspired by, like "Creatures of the Night" and "Fruits and Veggies".  So when I found myself with time to finally put something together THIS month, I crossed my fingers for what I hoped would be a really juicy, inspiring Theme....,

Well...? I certainly love farms, and I of course I adore animals.  But I still admit my very first reaction to this was... bleh.

That is, until one second later I flip-flopped the words giving me "Animal Farm"...,  and then it was off to the races, yee haw!

I recall reading 'Animal Farm' way back in middle school English.  We also watched the animated film in class.  I'm positive most of the political allegory of the story, Orwell's telling of the rise of Communism after the Russian Revolution, likely went WAY over my head at the time, though I remember I did find the tale of the trials and tribulations of these assorted squabbling, intrepid farm critters interesting.  It wasn't until high school however, when I read the book, "1984", that I found myself really sucked into Orwell's Dystopian writing (with"1984" still being my favorite of Orwell's tomes, and in fact among favorite books in general.  Note that I did do a small tribute to '1984' years ago as part of the 2012 '29 Faces' Art Challenge -- hope to do another, more thorough dedication again one of these days, when the stars align!).   However 'Animal Farm' is fascinating too, and so I set out to do a little fangirl tribute....

Thus I had my concept, which I knew would incorporate a portrait of the handsome author in some manner.., but what next?  I'm sure I could have argued my way into making a straight-forward, simple portrait of George fit the theme -- but I wanted to do more than that.  Yet how to visually reference his book "Animal Farm" in a way to be instantly recognizable....? 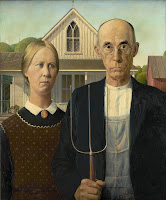 With what has to be probably the most iconic farmers art history, that's how:  Grant Wood's gorgeous 1935 classic, "American Gothic".  It's only been parodied bazillions of times already, so why not another.....?  I do love my 'mash-ups' after all...!

And so here we have the venerable author, George Orwell, posed a la "American Gothic" iconic fame, along with a main character of his story, the pig named Napoleon.  In his political allegory, "Animal Farm", the ambitious and power-hungry Napoleon is a stand-in for the tyrannical Soviet dictator, Joseph Stalin.  To portray Napoleon from the book, I featured him here in full Empire regalia (though he doesn't actually wear such in the book), to refer to exactly which pig character of the several in 'Animal Farm' I am representing.... 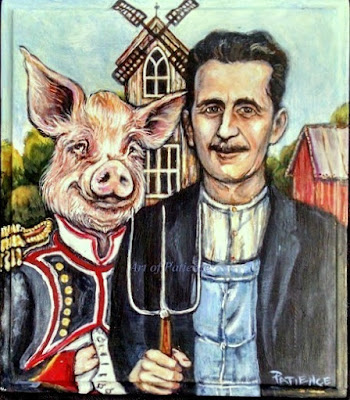 Of course, it can't very well be a loving spoof of the painting "American Gothic", without including the famous, American Gothic-style window of the house Grant Wood's farmers stand before, from which indeed the painting got its name (and which I've actually visited in person, in Eldon, Iowa).   With George and Napoleoan standing in front of a house of American Gothic-style architecture making little sense however, instead I took liberties (lots and lots of liberties) and turned the structure into the windmill which features so prominently in the book (the Windmill being Orwell's symbolizing for the massive infrastructure projects the Communists embarked upon after the Russian Revolution, which the animals of the farm take to building and re-building.).

The following is my auction description.....:

My entry for this month's Nibblefest Art Contest (NFAC), the theme for March being "Farm Animals", features a wee portrait in loving tribute to the British author, George Orwell, and his famous 1945 book of political allegory, "Animal Farm" (...in addition to the classic USA painter, Grant Wood, of "American Gothic" fame).

Painted in acrylics upon a 8.25" x 9.5" found wooden plaque, this original piece is signed and ready to hang.

It didn't take long at all to come up with a concept for this month's theme.  A mere flip-flopping of the words "Farm Animals" instantly gave me "Animal Farm" and I was off and running.  I first read George Orwell back in high school and have been a fan ever since, so I was very happy indeed to have occasion to pay him my own little personal tribute.  Thus we have here a portrait of the writer along with a main character of his classic "Animal Farm" tale, the commanding and power-hungry pig named Napoleon. They stand in front of a windmill, which features prominently in the storyline.  (And of course, because I love my little artistic 'mash-ups', guess I just couldn't resist tossing in an additional loving, if cheeky, reference to what has to be one of the most iconic farmers in art history (...and with sincerest apologies to artist, Grant Wood, of the 1935 masterpiece, "American Gothic"!) )

Here's hoping you enjoy my little tribute as much as I did painting it...! 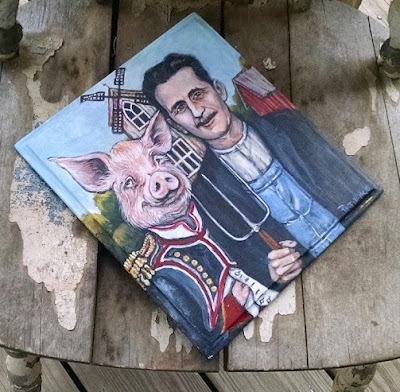 (To see ALL the lovely "Farm Animal"-themed entries in this month's Nibblefest Art Contest, click here....). 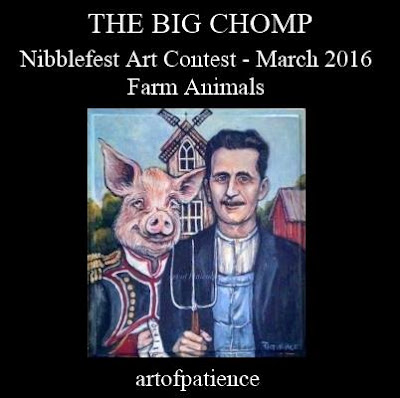 A big shout out of thanks to my lovely bidders...!

Posted by Patience at 8:16 AM No comments: