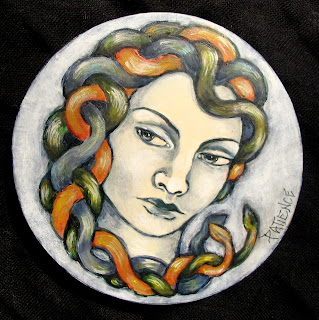 "...MEDUSA..."
(acrylic on vellum mounted permanently on a 5" round piece of found piece wood)
(Click here for auction link)

Yesterday I wrote about my first entry into this month's Nibblefest Art Contest, a painting entitled "Two Turtle Doves".  Today I am writing about the above painting, my second entry for April's Nibblefest.....

As I kvetched yesterday, the theme of 'Reptiles' this month really had me dragging my feet at first -- still, determined as I was, I set out to come up with at least two appealing ideas for myself.  I had already decided upon the idea for 'Two Turtle Doves', when my thoughts turned to probably that most quintessential of all reptiles, the serpent.  But how to incorporate 'snakes' into an attractive Nibblefest entry, one that anyone might care to bid on, much less one I would be motivated to even paint in the first place...?

One idea that seemed potentially promising was "Cleopatra".  Cleopatra has often been popularly portrayed as sporting an elaborate gold cobra headpiece, as well as spiral snake bracelets.  Furthermore she is legendarily believed to have  ended her own life by allowing herself to be bitten by poisonous asps.  Intriguing to be sure, but still, even after plenty of rumination, the idea for an art composition involving any of this just did not materialise in my head.  Discouraged, I asked my daughter, who was in the room with me at the time, what she thought about "Cleopatra", or "snakes".  She responded with, 'Hmmm, Cleopatra's cool. But what about that woman with snakes for hair...?"   As soon as the words left her mouth I knew I had my second entry -- Medusa!  Of course, the perfect thing -- what a clever girl!

But how best to portray Medusa, that mythological beast/woman, whose mere gaze could turn men into stone -- and upon what?  I recalled an odd small bit of wood I'd picked up at the end of a local rummage sale last year, and for free no less because it was to be tossed out.  It was round, 5" in diameter, with a groove on the back edge of it, making me think that it was originally the lid for a kitchen canister or some such.  It must have appeared somehow potentially useful to me at the time, because I pocketed it, brought it home and stashed it in my studio -- and fortunately was able to find it after only a moment's fishing.  Thus, after a little sanding, I had my canvas (regular readers know I get a perverse thrill from re-purposing seemingly useless objects) -- perfect because with it's round shape, it does rather resemble a little an old, ancient artifact of antiquity.  And as for my portrayal of the legendary Gorgon?  Contrary to the usual image of a hideous Medusa with wild and crazy snake hair, I decided to paint my own Medusa as dangerously beautiful, with a thick, colourful braid of intertwined serpents.  It's how I see her in my head.

To see ALL the various 'reptillian' Nibblefest Art Contest entries this month (which ends tomorrow, on the 27th), please check out this link.....


(My usual little blurb regarding the Nibblefest Art Contest:  Nibblefest is a fun and friendly, monthly themed art competition open to all.   It begins the 20th of each month, and is hosted via Ebay.  Bidding for entries starts at .99 cents -- fun for artists AND collectors...!  Please see the Nibblefest Facebook Fan Page for official rules and more information: https://www.facebook.com/nibblefest?ref=tn_tnmn )
Posted by Patience at 7:17 PM

You did a wonderful job portraying Medusa. Dramatic and lovely at the same time.

Many thanks, Theresa! Lovely of you to take the time to write such a kind comment, and the feedback is always much appreciated :-) All my best!