As usual, with a busy summer on my end I have all kinds of bloggery to catch up on in here.  And so I'll get down to it, starting with this, a post regarding my entry into July's Nibblefest Art Contest....


The theme this month is 'Fairy'.  Well, surely, I've enjoyed my share of Fantasy over my many long years -- who doesn't love settling in to a juicy fairy tale?  The Brothers Grimm?  Shakespeare?  The art of Brian Froud?  Hans Christian Anderson?  The 'Lord of the Rings' films? (Okay, so there aren't actually any fairies in LOTR, but you know what I mean.)  And yet, I guess I still wasn't that interested in exploring the 'literal' fairy route (been there/done that) for this round -- looking instead to enter something a little ...different.  And a little more 'me'..... 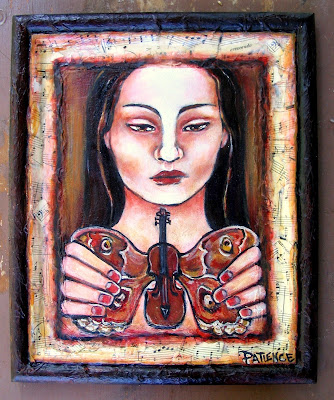 That said, I was still glad for the opportunity with this theme to indulge in yet another of my personal fetishes.  Confession: I have this funny little thing for...(whispers)....moths.  Not those nasty wee pests that ruin your wool sweaters (though certainly those are technically moths too of course).  No, I'm talking about those ethereal winged critters that look like your average butterfly's more sedate and buttoned-up sisters. The mysterious markings and nocturnal habits of moths have always intrigued me, so I'm drawn (heh, 'drawn') to featuring them in my art from time to time (most recently here and here).  And I'm perpetually on the lookout for such showy lepidoptera (including but not limited to Cecropia, Luna Moths,  Polyphemus (with their imitation 'owl eyes' --  I mean how clever is that, the little fakers!), Sphynx, etc etc) out in the wild.  But, being as they are among those elusive Creatures of the Night, any sightings of them by me have unfortunately been about as common as seeing actual fairies themselves.

There was however one very specific close encounter of the moth kind, in my childhood.  Once when I was a young girl walking from school, I happened to spy an oddly-shaped, gray papery Thing, attached to a twig.  Schlepping it home with me, twig and all (which I would have gently discouraged my own children to do -- admire and learn for sure, but try to leave Nature be already!), my parents identified it as a cocoon.  Then it somehow ended up in a fishbowl, which was nonchalantly shoved behind a chair in the corner of our family room.  And promptly forgotten about (again, this wouldn't have happened with my own kids!).   Time went by.  I can't  say for sure how much exactly, but it seems like quite a long time (as in months?  Like over the winter maybe?  Is that even possible...?).  Fast forward to the day I was vegging out in the family room, transfixed by the TV most likely, when something caught my  attention, out of the corner of my eye.  That 'something' turned out to be a gloriously ENORMOUS moth, hanging from the electrical cord of the table lamp, casually flapping it's broad, earth-colored wings like it owned the place.  I was so shocked (we had totally forgotten about that thing!) -- as well as fascinated.....

Memory serves that we identified it as a Cecropia, one of the largest and most lovely of all North America's moths.  And it certainly was large.  And truly beautiful.  But this was in the dark ages waaaaay before the internet, so who knows what reference material we were using.  In any case I remember taking it to school with me the following day for show-and-tell, then bringing it back home, where I released it into a small trees-y thicket that stood in the back of my yard.  That was the first and last time I ever had such an up-close and personal encounter with one of these beauties.  And it clearly made an impression on me, since I've often reflected upon the memory over the years (mostly just hoping the thing went on to thrive without too many ill-effects from our (miss)treatment...!).....

The following is my auction description:

My entry for this month's Nibblefest Art Contest (NFAC) (~the theme for July being 'Fairies') is an original acrylic/mixed media piece created from a second-hand frame.

This original 9.5 x 11.5 painting, of a woman compelled to confront her own creative muse, as fragile and elusive as a mothly fairy, is one of the largest pieces I have entered into Nibblefest.  Re-purposing an old, second-hand frame, the painting has been built up using multiple layers of paper and paint.  The brown-painted, rounded sides of the wooden frame are complemented by the addition of a border created by using small, torn bits of vintage sheet music, to continue the musical theme.  The overall effect is really quite lovely, with much depth, richness and dimension.

(And, my usual little blurbie about working with old frames:)

I have recently begun painting almost exclusively on supports I create myself utilizing the old, salvaged picture frames and pieces of scrap wood that cross my path from time to time. I feel good about giving these unwanted homeless items a second life, not only because trees were cut down at some point to produce them, but also because by the time I get my hands on them they are usually destined for the landfill. The process of recycling vintage frames into painting supports/canvases is a lengthy one, typically involving stabilizing the frames (which can be quite rickety), cutting thick paperboard to fit, securing it all and pasting and building up a painting surface with layers of overlapping scraps of paper. The end effect is a highly textured surface that contributes dimension and depth to my paintings, complete with a built-in frame, into one cohesive, ready-to-hang whole....

(And lastly, for fun here is a picture of the old vine-covered chair sitting on my porch that I've been using as a photographic prop (like in the photo above).  I'm just allowing the vines to roam wild and free this year to completely entangle it -- don't you just love the effects...?):

Labels: ebay, Nibblefest, old frames, recycling/repurposing/upcycling, Something From Nothing, The 'Heart' of Patience