(Can you tell I'm having fun with these?)

I made an additional five minimal-prep, (mostly) no-cook, McDougall-friendly meals to add to my stockpile this afternoon -- now making a grand total of 19 ready-to-cook meals awaiting in my freezer.

Before starting my session today, I took inventory of the ingredients I already had on hand.  I knew there were some batch-cooked chickpeas made last month that I'd thrown in the freezer thinking to use them somehow in the future.  Well, the future is now, so these were put into service.  I also had several butternut squash on hand, plus some frozen garden kale.  I browsed and looked up various Freezer Dump recipes online, comparing ingredients and targeting the ones that called for stuff I either already had on hand, or could easily substitute....

I found four likely recipes featuring butternut squash (or in one case sweet potatoes, for which I subbed squash), and got to work.  No shopping was required in the making of these meals (which is great because ever since my daughter went off to college with our 2nd car, my husband and I are sharing a vehicle between us so I'm not making it to the store as often).  I was able to use what I already had at hand (and much of it from the garden) to save myself some money that way.  Plus time as well, by doing all the chopping, measuring and 'dumping' all at once (with little pre-cooking) when putting these together, assembly-line style.

The first two bags from the left are the same and hold "Hearty Lentil Stew", by Super Health Kids.

The bag in the smack dab middle is "Autumn Harvest Soup with Butternut Squash, Kale, and Farro", by Kalyn's Kitchen.

The bag second from the right is "Freezer-to-Slow Cooker Thai Pineapple Curry", by New Leaf Wellness.

As usual, I had to make a few alterations...:

The "Hearty Lentil Stew", by Super Healthy Kids recipe was already plant-based (nice!), but I did end up subbing chopped butternut squash for the sweet potatoes, what with squash being the star Veggie of the Day.  I also added a handful of chopped garden white potatoes the recipe *didn't* call for, since I have a tub of those and must make a concerted effort to use them before they go off.  (I'll confess I'm a little nervous about freezing the white potatoes because it goes counter to everything I've always read about freezing produce -- still, the people who routinely make these 'dump' type of meals swear it's fine!  Guess we'll find out).  I also added in some frozen, unidentified zucchini-like veggie that was given to me by a Pakistani friend, that I'd chopped and thrown in the freezer earlier in the season. I reduced the salt significantly, plus I added a cup or so of some homemade veggie broth I had on hand (to cover the white potatoes in the bag -- better for their overall freezing process I believe.  Fingers crossed!), and will add more on cooking day.  With all this and my additions, I think this stew should be 'hearty' indeed. Planning to serve it with bread or biscuits, and salad.

For the "Autumn Harvest Soup with Butternut Squash, Kale and Farro", by Kalyn's Kitchen, I subbed the farro with soaked wheatberries I had frozen (tried sprouting them a few weeks ago without success, and they ended up in the freezer.  'Waste not/Want not', I always say-- glad to have found a use for them!).  I omitted the olive oil called for (avoiding oils), and used fresh chopped sage from my herb garden.  I used less squash than the recipe called for.  The kale was from what I'd previously harvested and processed earlier in the season (happy to find uses for that as well, because I have a bathtub full (see this post).  I added 3 cups of broth to the bag, and will add an additional 3 cups on cooking day (planning to serve this with bread, cornbread or biscuits)....

The "Freezer-to-Slow Cooker Thai Pineapple Curry", by New Leaf Wellness,  was also happily already plant-based.  I used the previously batch-cooked chickpeas I had in my freezer, instead of canned.  I used canned pineapple chunks instead of fresh.  Instead of the coconut milk called for, I blended soy milk with a little dried coconut to hopefully get a little coconut-y flavor without a lot of added fat (definitely flying off the flight map here).  I also added a little frozen garden kale just to punch up the greens content -- plus to use some of the kale/collard bounty I have in the freezer.  Planning to serve this with brown rice.

For the "Slow Cooker Thai-Inspired Butternut Squash and Peanut Soup", by Kalyn's Kitchen, I omitted the oil, and added some of those cooked/frozen chickpeas, plus a cup of my homemade veggie broth.  I used half the peanut butter called for, and added a T or so of PB2 powdered peanut butter.  I subbed soy sauce for the fish sauce, and used Korean red chili paste for the Thai red curry paste (not exactly the same, possibly not even close -- but whatever!).  Planning to serve this with rice or other grain.

So there you have it.  I didn't time myself assembling these -- would have been tricky to do anyway because I was interrupted at several intervals (even driving my puppy to the local dog park at one point in the middle of it all), but I estimate it maybe took about 1.5 hours of actual hands-on time putting these 5 together...?  With a goodly chunk of that spent on the peeling and chopping of the squash and the onions.  But that's okay because for 5 nights in the near future (19 nights total with my other frozen dump meals.  And heck, maybe even 38+ if you count leftover nights...!) I'll be looking forward to super easy, healthy, economical and stress-free meal times....


I'll update with my impressions later when I actually give these a try. 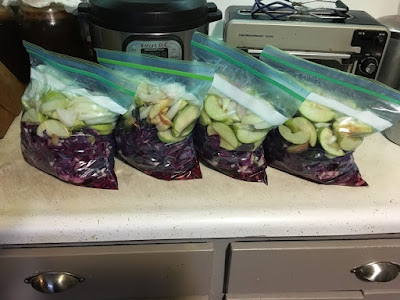 Did you do updates on the previous dump dinners after cooking them? I'm curious as to how they turned out.

Greetings Jacqui, thanks for the comment, and no, I haven't tried any of these out yet. I still have so much fresh garden produce sitting around urgently needing to be consumed before I start hitting up the frozen stuff. Plus I made all these so recently I feel as though they need to sit in the freezer a little longer in order to make it 'worth my while' -- which probably makes no actual logical sense -- still, I am planning to try one out in the coming weeks....

Well yes, it was -- though a little less time and effort spent than if I'd made them all individually, start to finish. Well, theoretically anyway ;-). But here's looking forward to an afternoon soon, when I'm busy with some project and loathe to stop everything in its tracks to get dinner going. Annnnnnd...? I won't have to! All covered! :-D

This is awesome, Patience! You know that I'm overhauling my cooking methods, this fall. I'll be trying something of this sort out, after the first of the year (when I actually have room in my freezer). And I do believe that you are saving time, over preparing for each meal, one by one. I know that in cooking large pots, enough for 3 meals or more, that I save quite a lot of time. I would guess that maybe 1/4 of the time spent "cooking" is actually getting things out and then cleaning up afterward. Plus I find that I'm more inclined to use my food processor and other conveniences, when I am preparing a huge batch of something, as opposed to when I'm just making one meal at a time.

Thanks so much, Lili! I'll be really interested to see how it goes for you! I ruminated upon tall his for months before I finally gave it a try. Since I'm altering the recipes so much to fit my way of eating, I really needed to come up with a personalized game plan. Plus, they way the recipes are presented by the Freezer Dump bloggers, whereby they make "12 separate meals in one hour" sort of thing, the compiling and organizing of all those long shopping lists just seemed a little overwhelming....! It's not how I normally shop -- I tend to purchase in bulk and stock up on sales, use the garden produce I have on hand, and so forth (not to mention I dislike grocery shopping and prefer to just get in/out of the stores as quickly as possible). But then I realized instead of trying to emulate their 12 DIFFERENT MEALS IN ONE GO plans, I could concentrate instead on one or two primary ingredients -- say, chickpeas (purchased in bulk and batch-cooked) and butternut squash from the garden. Then I could figure out 4 likely recipes featuring these, and hypothetically make 3 meals each of the 4 recipes, for my total of 12 meals (just as an example). In any case, I confess I'm ever so slightly jealous of the meat-eaters, because I imagine it might be actually even quicker and easier to put these together, lol...! :-) But still, I'm looking forward to trying more Freezer Dump sessions like this -- though as with you, I'll have to wait a bit until I have more freezer room to spare...! And thanks again, Lili -- much appreciated...! :-D