Papier Mache To The Rescue 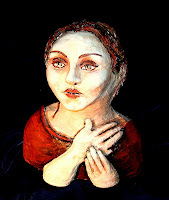 This little lass (12" x 10") was a project I completed last year for an EBSQ forum artist's challenge. She's very sweet in person -- I don't believe the photo above entirely does her justice (I'd take another, though unfortunately? Since this one was taken, she found her way upon the floor 'somehow', by a certain two offspring (who shall remain nameless), becoming the hapless casualty of our very mischievous, free range, paper-chewing crazed house bunny, and is now awaiting major surgical repairs). Her form is hollow and was originally cast (along with two fellow WIP figurative busts, currently sitting around here unfinished) from an armature I built up and shaped, her features and details added after casting....

Which all brings me to another junk item I found in our basement yesterday - a desktop M 'n M dispenser (sort of like a smaller cheap version of a bubble gum dispenser), entirely plastic, cracked, missing it's top, and utterly useless as is. From whence it came from I have no idea. Though I think I might know where it's going, having had a stroke of inspiration when pondering how to possibly salvage such a thing (because it's such a big hunk of the dreaded plastic to scrap otherwise). It dawned on me it does have a general bust-like shape to it, rather like my lass above, if one uses one's imagination -- the round top reminiscent of a 'head', the base of it 'neck' and 'shoulders'. I think it may soon find a utilitarian second life as part of the internal armature of a future papier mache project. Of course the proportions are very wonky and would need to be somehow corrected -- but hey, nothing a little p.m. can't rectify, right? (Hmmm, perhaps something even Halloween related -- an event that will be coming up fast before we know it I'm sure....)....
Posted by Patience at 10:51 PM No comments:

In the past few weeks, my family and I (emphasis on the 'I', ahem) have been attempting to clear out our basement. We own a century+ year old home, a fixer upper (putting it mildly), complete with your typical 'old-house' basement --really, more of a cellar than anything.

Living in the tornado-prone Midwest, we are certainly very grateful to have anything underground-- not to mention the extra space a basement can afford (albeit spidery and damp) for the laundry, freezer, tools and such. In the past few years however, it was well on it's way to becoming primarily a dumping ground -- the least of which for waves of toys and playthings my two kids (almost 15, and almost 12) kept gradually growing out of, but also small, dead appliances, items in need of repair in addition to other misfit odds and ends (-- exactly what you might expect to occur when one packrat marries a fellow packrat and sets up housekeeping for nigh on 17 years). Add to that a spring flood or two (or three), and you can probably imagine the state of Disorder we managed to achieve down there. Something had to be done.

So, little by little I've been heading down to sort and straighten up. And true to my previous post awhile back regarding Waste, I am making the effort to practice disposal responsibility. Fortunately, a big portion of the lot is recyclable -- plus another chunk slated for donation to Salvation Army and that ilk. But I'm afraid a number of items may be destined for the trash unless I manage to find inspiration to repurpose them in some intriguing way.

One example of this would be the bag of mangled barbies now taking up space in my studio -- so beyond the pale they would be rejected even from the Land of Misfit Toys. I know there is an entire genre dedicated to altering dolls in general (with a sub-niche specifically Barbie) though until now it's never been something I've personally attempted, or even considered. I think I may have to give it a go though, to see if I can avoid these things from taking up permanent housekeeping in the local dump with their evil non-biodegradable selves (note that we rarely if ever actually purchased Barbies for my daughter -- I think they procreated down there). It will be an interesting challenge at any rate.

I found several other scrap objects down there that I'm intending to incorporate into projects, at one capacity or another. One is an gutless radio -- probably from the 70's or 80's, I'm guessing? I think my kids dissected it once it was broken -- at any rate, all that's left of it is essentially it's particle-board and plastic framing. I have the vague notion of making a shadowbox thingie from it, among other ideas -- we'll see...
Posted by Patience at 9:19 PM No comments: