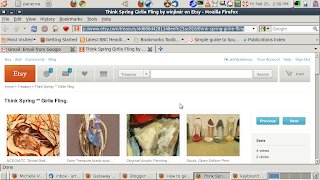 
Yay! Thrilled to be included in the above Etsy Treasury...! Thanks, Windi!
Posted by Patience at 12:30 PM 2 comments: 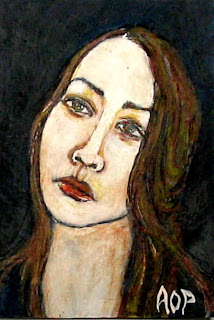 One of three ACEO entries by me for this month's Nibblefest Art Contest (NFAC), the theme for February being 'Dreams'.....

When reflecting upon this month's theme, the first things that came to mind were favorite songs of mine that happen to have the word 'Dream' in their lyrics. I thought long and hard about all the tunes I know and cherish from a lifetime of listening that feature the word 'dream' -- a surprising number to choose from as song after song popped into my head. So many in fact that I found it very difficult to narrow them down to a mere three -- though in the end, after much deliberation, I finally managed to whittle the list. As such, one song that I have always loved, but also been a little haunted by, with its intriguing poetic lyricism, soaring vocals and swirling orchestral, is David Bowie's 'Life on Mars', about a lonely, unhappy girl who attempts (unsuccessfully) to find solace and escape from her difficult life through the watching of films (and I know I had to have spent many long HOURS listening (and pondering) this classic tune as a pensive and moody middle-teen):

".....But a friend is nowhere to be seen.
Now she walks through her sunken dream
to the seat with the clearest view,
and she's hooked to the silver screen...... "

So here we see her, 'the girl with the mousy hair', as she sits alone in the darkened theatre, enduring yet another nonsensical movie that says nothing to her about her life.... 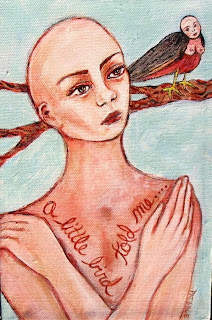 
This piece, the 2nd in my Breast Cancer Series (as painted for the art show of a local breast cancer symposium in which I was invited to participate a few months ago) reflects upon the rumor circle that reverberates through one's community, and even beyond, on the news and collective realization of one's cancer diagnosis. While typically the old saying "A little bird told me' traditionally suggests tidings of positive circumstances to celebrate, this little bird brings news of a decidedly different nature....