Ayala, of Ayala's Art has initiated a terrific art blog challenge for the coming month. Being as that we're in a leap year, with 29 days in February instead of the usual 28, she is instigating a challenge called '29 Faces'. Faces of any kind, size, medium or dimension will be acceptable -- the point being that it works out to a 'face a day' for artists to conceive, create and blog about. And it begins on the 1st. 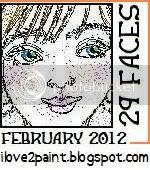 Well, anyone even remotely familiar with my art can surely infer that I love me some painted Faces, so as it was it certainly felt right up my alley. But also, being as that I have any NUMBER (dozens?) of half-finished projects involving Faces taking up precious studio space around here, I figured I could use this challenge as a springboard for getting back to all those pesky abandoned pieces I started with such enthusiasm, and fiddled with over these years, only to find so bloody difficult buckling down and actually completing already. Therefore I think this will be a great motivator and opportunity for me to tie up what feels like a bunch of mildly annoying loose ends (in addition to creating some new work for February's 'Nibblefest', etc etc).

I shall be tagging my Challenge posts "29 Faces" -- so if you are interested in following my own progress, or jumping into the Challenge yourself, please do...! All are welcome!
Posted by Patience at 11:50 AM 8 comments: 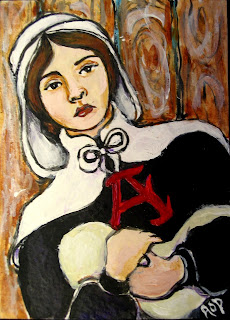 My second entry for this month's Nibblefest Art Contest is based on the old novel, 'The Scarlet Letter' (probably a pretty straightforward take on the 'Letters' theme, eh?). My listing description:

One of two ACEO original entries by me for this month's Nibblefest Art Contest (NFAC) (--the theme for January being 'Letters, Symbols, Numbers') features that much maligned, but ever steadfast, female protagonist of early American fiction, the infamous Hester Prynne of "The Scarlet Letter"..... Here we see Hester, her baby swaddled in her arms and her back against the wall....

Harken back to your high school literature class and that classic tome by the novelist, Nathaniel Hawthorn -- poor Hester has had the misfortune of giving birth to an illegitimate child while her estranged husband is well out of the picture. Her suspicious neighbours in her tight-knit puritan community turn upon her and punish severely, with public humiliation and shunning, as well as forcing her to permanently sport a large letter "A" (for "Adultery") upon her dress. Adding insult to injury is the fact that her seducer, the village pastor, is actually going along with the leading this vengeful pack, too spineless and cowardly to confess his own part in the wrongdoing. And yet, despite mounting pressure to give up the name of her partner in crime, she remains silent, all the while trying to maintain a life for herself and her daughter with as much decency and dignity as possible....
Posted by Patience at 7:58 AM 2 comments: 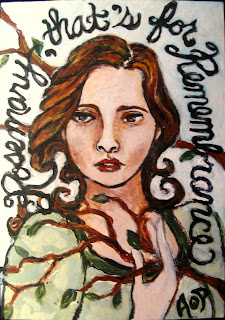 My NFAC ACEO entry, entitled "Ophelia: Rosemary, that's for Remembrance" (click for auction link. Note the image above looks so much better than the photo I had to use for my listing).

With the holidays behind us and things settling down a little around here, I was really motivated to enter this month's Nibblefest Art Contest. For December's I'd "cheated", so to speak, by entering an older piece that fit the theme with only a little stretching, and November's Nibblefest I'd missed entirely, nada. And so it was that I was anticipating getting something together this time around. While I wasn't necessarily mad about the theme, "Letters, Symbols, Numbers", it seemed likely enough. Still, as the 20th of the month quickly approached I found myself without any real direction of where I wanted to go with this -- just what was my take on "Letters, Symbols, Numbers" anyway? Usually something-or-other pops into my head pretty quickly, but here I was just drawing (pun intended) a total blank. A few false starts in the studio revealed nothing and wasted my time. The 20th came and went, and I was ready to just talk myself into letting it go this month (again). That is until two ideas finally came to mind that I actually liked and felt I could work with. Not to mention that it still wasn't too late to get in on a 5-day auction (never mind that I forgot to actually set my "5-day auctions" for 5-days, so they'll be running a little past the official end of the contest. Oops!)....

This first idea came to mind when I was pondering the concept of 'Symbols'. I was thinking of things around us that have symbolic natures to them, when flowers. with all their various meanings in olde folklore, came to mind. Which in turn lead me of course to 'Hamlet' (my favourite Shakespeare) and Ophelia and how in her highly confused and disturbed mental state she begins spouting off to anyone who will listen various flora and the concepts they represent. I thought about simply portraying Ophelia with all her pretty flowers and herbs -- but that seemed a little obtuse. In the end I chose to write her memorable "Rosemary, that's for Remembrance" line in script on the ACEO, and so we have 'Letters'...

Here is my auction description:

One of two ACEO original entries by me for this month's Nibblefest Art Contest (NFAC) (--the theme for January being 'Letters, Symbols, Numbers') features a character from what must be my personal favourite Shakespearean tale, the story of "Hamlet". Here we see Ophelia, Hamlet's girlfriend, climbing a willow tree that overhangs a small brook, shortly after she has recited one of her most memorable lines in the play....

Ophelia is very much in love with Hamlet, but his recent disturbingly bizarre behaviour has upset everyone at Elsinore's court, and she's no exception. Then he went on to seemingly abandon her, and that after (kind of accidentally) murdering her own dear father. Sheesh, with so much heartbreak is it any wonder she's become unhinged? She's been wandering about singing, playing with her flowers and not making a whole lot of sense -- telling the king and queen, "there's Rosemary, that's for remembrance". And now sadly, it wont be long before the branch breaks in her little tree, and she herself will become but a Memory, much to Hamlet's despair..... 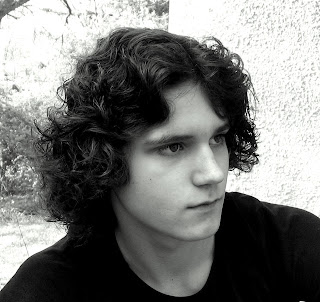 A creative soul, his 18-year-old self is in his second year of living across the country far away from us, studying classical ballet at a renown studio in a big city on the coast, in hopes of making professional dance his career of choice.

A wonderful dancer and excellent student, he is working very hard out there.

In addition to ballet he also loves music, in particular the Techno and Trance genres, and enjoys tinkering with and composing his own techno/trance inspired songs.

And so it was with special interest and motivation that, when my son requested a painting from me of a 'Blue Phoenix', as something he might use as an icon/logo/emblem as part of his DJ persona and online musical presence, I was only too happy to oblige. It took a little time to design, execute and complete, but I love doing art for family and friends so it was a particularly fun and enjoyable challenge for me. As such I managed to finish it up in time to give to him at the Holidays when he was home briefly (too brief!) for a visit....:

Labels: The 'Heart' of Patience 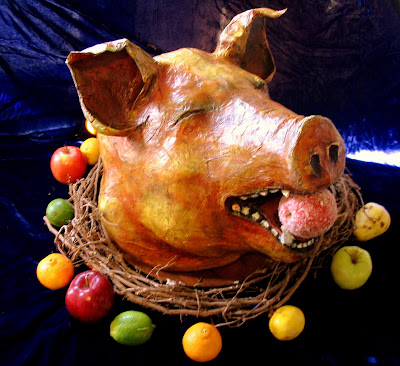