It appears my Horse Head headpieces of several years ago (above left) are being featured as today's 'Art of the Day' on the
EBSQ website's cover page.

The 'Art of the Day' theme for this week is ''Toppers: Things You Wear on Your Head".  And yup, I remember well custom making that particular pair of papier mache horse heads (having made well over a dozen by now) as 'hats', back in 2007 I think it was, for a ballet company in California.  Now my son, who back then good-naturedly (for the most part) modeled those headpieces for me in the photos, is a full-time year-round student of a ballet company in California (though not the same one).   Okay, so maybe not a real big connection there...--- but in any case, I've always said that being EBSQ's 'Art of the Day' always feels a little bit like being 'Queen of the Day'.   Thanks, EBSQ...! 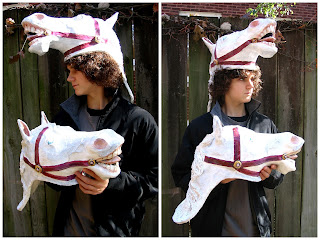 Posted by Patience at 7:19 AM No comments:

Once again, the 20th of the month rolls around, and, just as surely as we can rely on the inevitability of death or taxes, so can we count on the start of the Nibblefest Art Contest.

The theme for January was a little different this month, but interesting:  "Five Random Things"....

'Five Random Things"???  I admit I had to ponder long and hard on it this month (who am I kidding?  I have to do that EVERY month).  Incorporating five separate, unrelated elements into one painting posed a little bit of a challenge.  But of course as longtime readers will know, I always enjoy a challenge -- so when I found myself stumped for good and juicy subject matter (a 'Still Life' grouping might have been the easy(er) route?  But no...), I looked for inspiration in my typical fashion:  within the musical and literary influences that have resonated with me in my life.  The musical ended up winning out this month, when the old song, "Into White", from the album "Tea for the Tillerman", by Cat Stevens, somehow randomly popped into my head.  So much visual imagery in that one (definitely at least 5 things, and highly 'random' at that) -- almost too much really, in that I was worried at first about successfully making an appealingly cohesive composition for a painting.  I actually rejected the idea several times, while trying to come up with some other, less obtuse, concept.  But I simply couldn't get the song out of my mind no matter what I did (click here to hear song on Youtube)  -- so, in the end I decided not to resist.....

To incorporate all 5 random elements I did work a little larger than I usually do for Nibblfest (at 9 x 12).
The following is my auction description:

My entry for this month's Nibblfest Art Contest (NFAC) (~the theme for January being '5 Random Things') is an original acrylic painting on a 9 x 12 gallery-wrapped canvas. "Into White" is signed, with painted sides, and ready to hang.  At 9" x 12", it is one of my larger NFAC entries....

I built my house from barley rice,
Green pepper walls and water ice,
Tables of paper wood, windows of light,
And everything emptying into White.

A simple garden, with acres of sky,
A Brown-haired dogmouse
If one dropped by,
Yellow Delanie would sleep well at night,
With everything emptying into White.

A sad Blue eyed drummer rehearses outside,
A Black spider dancing on top of his eye,
Red legged chicken stands ready to strike,
And everything emptying
Into White.


~"Into White",
by the musician known formerly as Cat Stevens


When casting about for inspiration for this month's theme, 'Five Random Things', a song from my childhood came to mind.  The youngest of four kids, with my next oldest sibling seven years my senior, I recall the dominant soundtrack of my youth being the numerous record albums my big brothers and sister frequently played.  One of those albums was 'Tea for the Tillerman', by Cat Stevens, to which I loved singing along.  His song, "Into White", with its simple haunting tune and poetically surreal lyrics, never failed to send my youthful imagination into overdrive.  My entry, with its 5 Random Things, is a little tribute both to the song, and my childhood memories of it.

To see ALL the great 'Mushroom'-themed Nibblefest Art Contest entries this month
(with each starting at just .99 cents!),
just click here....

Another Pet Portrait: 'China', plus my Guest Post for the Nibblefest Blog


Another recent pet portrait, this one of a very cute and shamelessly spoiled little Shih-tzu dog, named 'China'....

In other art news, the next round of the Nibblefest Art Contest begins again in less than two weeks already.  In order to introduce this month's theme ('Five Random Things'), I put together a fun guest entry, if I do say so myself, for the Nibblefest Blog (by which I unabashedly bastardized the song, "My Favorite Things", from the 'Sound of Music'.  Weird Al Yankovic has nothin' on me, lol...!).

To check out my tongue-in-cheek guest post, plus all the lovely Nibblefest Artist art images I collected as visuals for it,
click here.....

Posted by Patience at 6:31 AM No comments:

A Pet Portrait: "Pierre", and other Art News

Here was one of my last pieces of 2012, a little pet portrait of a cockatiel (my own little guy actually), named "Pierre", taking a wee snooze as he so often likes to do,  while perched above the kitchen door.....

In other art news, I was happy to learn my
"Mushrooms" entry for December's Nibblefest Art Contest
tied for 2nd Place this round -- a big Thank You, to Nibblefest and to my bidders....!