Day 11 of the '29 Faces' Challenge: Work In Progress Altered-Art Dolls


Well, I had a nice blog past all written up late (very!) last night, only to have it  irretrievably eaten by Blogger.  How does that even happen...???  Not very nice of you, Blogger! (shakes fist)   And so here we are on Day 12 of the '29 Faces for February' art blog Challenge, but I will be posting twice today -- now this morning with my (reconstructed) Day 11 Face post from last night (grr), and then again this evening with my Day 12 Face post....

Being as that it was Saturday yesterday, and a fairly quiet one at that, I woke up with my head full of ALL kinds of grand schemes of getting ALL manner of stuff done in the studio.   Of course as the day wore on things didn't quite go along with my lofty initial plans, though I was able to spend a bit of time last evening to work on several ongoing projects.  Nothing that I can declare officially 'Finis!' to show off  as Day 11's Face -- however I do have a Work-in-Progress project involving faces to share....

As I've mentioned in previous posts, I really despite waste.   I understand of course that some waste is unavoidable in life, but it's really pretty appalling to me the extent that our modern day society has become so very...disposable.  I myself do try to personally tread as lightly as I can in this regard -- by recycling whenever possible, buying second-hand and in bulk, schlepping my own grocery bags (when I'm not forgetting them at home that is), avoiding excessive packaging and that sort of thing.   I know I likely could always be doing more in my attempts to be green, as we all could -- still, I do try to maintain an on-going awareness, and make responsible choices based on that.  Also, as I've written before, it's a mindset that has become absorbed into my personal philosophies as an artist, propelling me in my attempts to satisfy my creativity and make art, by using materials I already have at hand, or with objects that would otherwise make their way into our nation's waste stream. To make something, from nothing....

So, on that note, I guess that's why I'd held on to my daughter's aforementioned dead and broken barbie dolls all these long years....:


Either my kids were especially hard on toys, or they just don't make 'em like they used to (I suspect a bit of both) -- whatever the case, by the time my now teen daughter was done with this stage in her life, we had amassed quite a collection of dead barbie dolls.  Too practical to throw them out (actually it's a balance, and I have to be very mindful or I know it would be entirely too easy for me to slip into 'Hoarderism' --  but that's a topic for another post), I held onto them with the intention of upcycling them into something useful and beautiful one day, a project that I finally started some while back:

And so this brings us to my Face of Day 11.  Meet Myrtle:

Myrtle's internal armature was actually some sort of small, broken and discarded action figure of my son's.  I've fashioned an entirely new moon-shaped head from paper clay, and an entirely new papier mache body, complete with a long, sumptuous skirt:


Least of not which is her ample bustle and train:


I really wish I could show you before pictures (never remember to take those!), because her transformation from broken/small action figure to her current lovely, statuesque state is pretty radical.  In any case, I'm really pleased with how she is turning out thus far, and will continue to work on her and my other Dead Barbie Projects here as I go along.....

(And, in other late breaking news, do you recall my poor faceless, rabbit-bitten crow from a few entries ago?  Well, he's still faceless, but at least he now has a leg to stand properly on, with his nice, new, garbage-constructed base (which will make it far easier for me to actually WORK on his new face)...): 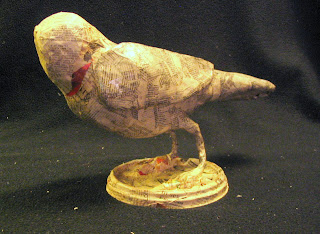 You've got some really cool projects started there! I'm anxious to see what becomes of the one with the arched doorway in her skirt.

Thanks so much for the comment, Melisa! Indeed, I've been thinking about how exactly I want to proceed with these guys -- typical me, I've gotten this far without a real super-clear vision as to how exactly I want to proceed, lol. ;-) I know I want to go in a slightly 'Lowbrow' directly, but gently so, and not over-the-top. In any case it was really fun fashioning all of the 'skirts' above (which involved some true 'upcycling' ;-) -- I have to say I've always had sort of an obsession with those old victorian and antebellum fashion plates. Such beautiful, ornate and complicated dresses (layers up layers of frills, flounces and fruffles), yet it always boggles my mind to think just how impractical, not to mention downright uncomfortable, it all had to be to sport on one's body, day in and day out. Can't even imagine it. How far we've come...!

I make alot of art from cereal boxes and toilet paper rolls. I once stapled hundreds of patp rolls together to make a giant honey comb. I have many projects in my garage studio but because of the finances right now cant do as many as I like they will stay on the back burner and marinate like a good spaghetti sauce. Im so excited to meet someone who does art from recyclables like me..you've triggered alot of peoples' imagination :)

Thanks Nick! And indeed, glad to hear you like to work with recyclables as well -- I say why go put and but a bunch of art supplies when we are surrounded by stuff all the time, that, with a little imagination and creativity, can be transformed into objects of interest, use and beauty....? There really is value in 'making something from nothing', as I like to call it, especially if it helps divert the junk from our nation's waste stream. So keep up the good work! :-)

Love your altered barbies! My girls are hard on Barbies too- I have a headless one that I've been using to sketch bodies,I want to try this now though. :)

Greetings, Squidmom (love your name by the way! ;-) and thanks so much for the comment -- indeed, what better way to turn something so seemingly as useless as a headless Barbie...into an object d'arte! In any case, it's probably not really fair to fault our daughters for their dismembered Barbies -- I suspect toys in general are produced much more cheaply now than in my day, and as such are prone to falling apart with even normal use. But oh well, at least we have a good solution for giving them purpose and meaning again, no? ;-) And if you do alter your Barbie, please come back and share the results -- I"d love to see it...! Thanks again! ~Patience